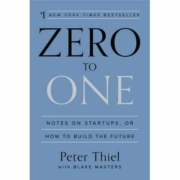 Tap into a new way of thinking about business and ambition by reading this book summary. Zero to One will challenge you to think for yourself on topics such as technology verus globalization, business monopolies versus competitive markets, and the mindset you really need to make a difference in the world. Learn from tech superstar Peter Thiel (PayPal, Palantir) and his protégé Blake Masters why the only opportunities really worth pursuing are those that create something truly unique – that go from “zero to one” rather than from “one to n.” And, learn the seven questions you should be asking yourself to find out if what you’re working on passes that test.

Zero to One is about the value of true innovation made accessible to the masses through startups. It outlines several tenets that keen-minded business people should hold dear, including why technology trumps globalization, why we should be supporting monopolies instead of “healthy competition,” why successful innovators have the worldview of a “definite optimist,” and why no one should be afraid of losing their job to a robot. Zero to One also delivers unique business insights, such as the four most important things to pay attention to about your product (hint: they’re not quantitative) and the seven questions every business must answer for itself.